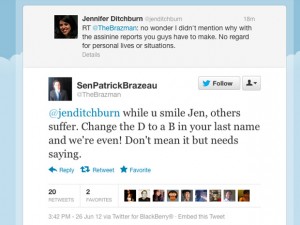 Jennifer Ditchburn is a journalist of the Canadian Press. She is in the news today because she was called Bitchburn by one of the youngest Canadian senators, Patrick Brazeau. The senator made a “witty” remark on his twitter account as you can see in the photograph. What instigated the un-tasteful comment was that Jennifer Ditchburn remarked concerning the senator’s attendance in the senate. Mainstream reports show that Brazeau was absent for 25% of senate sittings between June 2011 and April 2012.

The Ditchburn-Brazeau incident was regarding the senators participation, a senator appointed by Prime Minister Stephen Harper.

The interesting fact that the senator is bringing attention to, is his participation. Should senators be allowed to miss that many sittings?

Well, if you didnt go to work 25% of the time, what would your boss do?